This is how Robots can Reproduce themselves? Does not it seem odd and unbelievable? yes, it feels like, but nowadays it can be possible. Scientists claim to have seen a never-before-seen sort of replication in organic robots made from frog cells in the lab. The discoveries could have ramifications for regenerative medicine, among other things. Amazing? Yes, it’s true, you are right page here.

It may soon be simple to construct a living bot, Robots can Reproduce themselves. Researchers from Harvard University, Tufts University, and the University of Vermont have discovered that their frog cell-based Xenobots may self-reproduce, according to New Scientist. In their dishes, the bespoke organisms can amass “hundreds” of unique cells to spontaneously create baby bots that grow up in a matter of days. Because this keeps happening, you could utilize it to accumulate as many robots as you need to distribute drugs, clear microplastics from rivers, or do other small-scale jobs.

The mechanism of replication is just as noteworthy as robots can reproduce themselves. Normally, the cells would evolve into tadpole skin, but the computer-designed cell mix uses “kinematic” (motion-based) reproduction, which is only observed in molecules.

Yes, the researchers recognize the technical and ethical issues that arise when robots copy themselves without prompting. According to project co-leader Joshua Bongard, the team’s goal is to understand self-reproduction and discover how to “manage it, direct it, douse it, exaggerate it.” This development could be fine-tuned in a lab setting, resulting in carefully managed growth. As a result, regenerative medicine and anti-pollution tools may become possible that were before unthinkable.

Some scientists have ethical concerns about how Robots can Reproduce themselves?

However, some scientists are concerned about this. Nita Farahany, a Duke University law and philosophy professor who investigates the ethics of new technologies, was not involved in the xenobot project. “Any time we try to harness life,” she told Smithsonian Magazine, “we should acknowledge its potential to go really badly.”

A xenobot, like a hypothetical von Neumann machine, can’t copy itself without raw materials, according to the researchers. As a result, they have a very slim possibility of escaping the lab and reproducing on their own. All the researchers have to do now is get rid of the inventory of free stem cells, and they won’t be able to manufacture any more xenobot .

They can’t change or evolve on their own, either, because there’s no genetic material from the original xenobot, according to Blackiston.

He describes it as “finding stray fragments of a human floating around and gluing them together to produce a duplicate.” “It’s difficult to see how [evolutionary] selection might affect that because nothing is passed down from generation to generation – each one is self-contained.”

The researchers hope that one day these xenobots and their ability to self-replicate can be used for humanity’s benefit.

“This is really just a first step,” Blackiston says, “but you could consider further down the road.” “If we could program things better, maybe they could pick up and move specific cell types that we desire or assist us to mold whatever we’re producing in a dish for regenerative medicine,” says the researcher.

What fascinates Kriegman is that “this form of replication occurs spontaneously.” Of course, it necessitates highly specific conditions, but “it didn’t have to evolve over billions of years,” he claims.

“We consider how long it took for life on Earth to evolve,” Kriegman explains. “It’s a long story, but we discovered a completely new form of reproduction in organisms here in a dish under the correct conditions.”

“Perhaps life is more expected than surprising,” he remarks, as he discovers a new sort of self-replication.

So that’s all for now but this theory Robots can Reproduce themselves sometimes seems unbelievable as we know this era is called the era of inventions. Any impossibility could be changed into a possiblity. 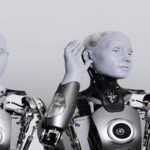